“Where can your College of Asia-Pacific degree take you?”

Our Alumni Panel Discussion will provide you with the answer to this question, and more!

Five successful CAP alumni will be answering all your questions on how and why they were able to achieve what they have with their careers, and how their CAP degrees assisted them in the process.

Get to know our alumni guests before-hand; refreshments will be served from 5.30pm.
The panel discussion will commence at 6.00pm, with the discussion being opened to the audience from 7.00pm; so don’t forget to bring along all your questions!
There will also be an opportunity for you to further mingle with our guests after the discussion.

Peter won his OAM for service to the international community following the earthquakes and tsunami which occurred in Japan in 2011. Volunteer facilitator and support team member for the NSW Fire Brigade’s Urban Search and Rescue Team deployed to the Minami Sanriku area following the 11 March 2011 earthquakes and tsunami. Then, Counsellor, Strategic-Political, Australian Embassy Tokyo, Department of Foreign Affairs and Trade.

Jonathan Muir:
Adviser, Australian in the Asian Century Taskforce, Department of the Prime Minister and Cabinet

Jonathan has worked for PM&C, DFAT, including as a Counsellor in the Australian Embassy Jakarta. His earlier background was as an Engineer and he was a lecturer in mechanical engineering at CIT. He has a Diploma of Engineering from Southbank Institute of Technology, a Bachelor of Arts, Political Science and History from QUT and a Master of International Affairs from ANU.

Sarah Cameron:
Current PhD Student in the School of Politics and International Relations

Sarah’s qualifications include a masters majoring in Public Policy, from the ANU, and a Masters in Sustainability and Responsibility from Ashridge Business School in the United Kingdom. As an undergraduate at ANU she participated in the Asian Studies Distinguished Scholar Program. She is currently conducting PhD research in ANU’s School of Politics and International Relations, looking at political behaviour and the global financial crisis in OECD nations. Outside of academic pursuits her career has been varied. Early in her career, she ran educational programs in Indonesia, and later translated Indonesian for Oxfam Australia’s labour rights team. She also facilitated workshops at events for young leaders including World Youth Congress events in Scotland and Turkey, and the Council for a Parliament of the World’s Religions in Spain.

Satish Chand:
Professor at the ANU College of Asia Pacific, principal economist at the Australian Taxation Office and Professor of Finance at the University of New South Wales

Dr. Chand is currenlty an adjunct professor at the Crawford School of Public Policy at the ANU, and is also based at the Australian Defence Force Academy, UNSW in Canberra. His areas of expertise include economic growth, development and international trade. He has worked as a consultant for the Asian Development Bank, the International Monetary Fund, The World Bank. He has also previously worked for the Governments of Australia, the Republic of Marshall Islands, Papua New Guinea, Vanuatu and Fiji.

Dominique’s graduated with a Bachelor of Asian Studies (Specialist – Japanese)/Bachelor of Laws from the ANU. She later completed a Graduate Diploma in Legal Practice. She is the founder of Domozori Trading, a business that ethically sources its products from Cambodia (www.domozori.com/). She also currently works at the ACCC and specialises in Asia-Australia trade and investment relationships. She has also previously worked in various managerial and advisory positions in the international trade and development industry, food production industry and government administration industry. 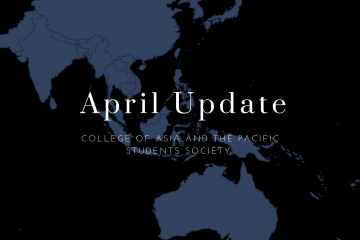 So far, a very very successful year has been had by the 2019 CAPSS Committee! We are very pleased to welcome on Serena Ford as our new Education Officer joining James, and our brand new Read more…